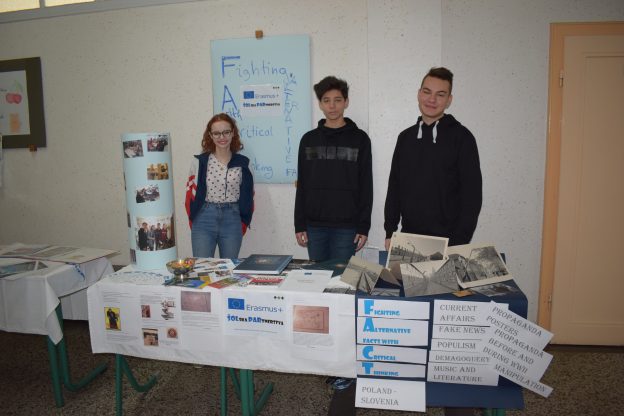 [box style=”rounded” border=”full”]Holocaust Remembrance Day presentation
On 12th of February 2020, we attended a Holocaust Remembrance presentation held in Ruše library. Presentation was extremely extensive and interesting. Most interesting for me was a topic titled death factory, there was a picture on that slide that stayed in my mind, in the picture there were a large number of Jews that just arrived to Auschwitz, it was terrifying that most of them didn’t even survive their first day at Auschwitz. That thought stayed in my head for a while and it made me extremely sad and mad, how can someone inflict so much pain and suffering to another human I was constantly asking myself during the presentation. The goal of the seminar was to revive the horrific actions people have done in act of the holocaust and that those acts should never be forgotten, so history doesn’t repeat itself. On Wednesday, February 12, we attended a lecture by Mr. Boris Hajdinjak, who showed us what the life of people from Slovenia was like at Auschwitz during the Holocaust. Mr Hajdinjak presented stories from people who have been “unfairly” (nobody was legally) discriminated against. In addition to the Jewish side, he presented us stories from Roma sent to various camps by the Nazis, most often to Auschwitz. Although we were there, we didn’t take to much interest in the Slovenian citizens, in Poland we focused more on the Poles and on the general horrors that took place there.
At the presentation in Ruše Library we got to know the Slovenes and their stories. In Auschwitz, I did not see how precisely they were labelled, I remember the tattoos, but beside the tattoos there were also stitches that totally categorized every individual. It was interesting to see how the emblems for Slovenes were changing throughout the war – at some point they were already known as Slovenes, although the Germans did not recognize it as a country.
Unfortunately, some people want to forget about this part of history, we mustn’t. And as Boris Hajdinjak wrote in one of his articles: “Behind every name is a story,” and we must never forget it.